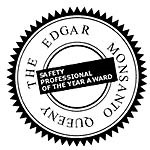 If you are not aware of the “SPY” award here is a little background. Edgar Monsanto Queeny, son of the founder and third president of Monsanto Company, perhaps more than any other chief executive in the history of American industry, saw first-hand the tragedy that can result from an industrial accident. Mr. Queeny was president of Monsanto on April 16, 1947, when the explosion of a French freighter destroyed Monsanto’s Texas City plant, killing 512 persons, including 145 Monsanto employees. Mr. Queeny was appalled by what he saw as he viewed the destruction. A short time later, he wrote a report to employees and shareholders describing what he had seen and what it motivated him to do. It was, as a national news correspondent put it, “a masterpiece of restrained agony.”The loss and devastation moved him to place even greater emphasis on safety in the company’s operations. The firm’s enviable safety record to this day reflects Edgar Monsanto Queeny’s deep personal commitment to protect the worker from industrial accidents and health hazards.

It is in his memory that Monsanto Company proudly supports the objectives of the ASSP and annually sponsors this award for outstanding accomplishments by one of the Society’s top professionals.

Similar to the National award the Chapter SPY award covers the past five years of achievements and specific areas of accomplishment including: demonstrated knowledge and expertise, ASSP activities, professional contributions, awards/innovations, and leadership.

To nominate someone for the ASSP Northwest Chapter Safety Professional of the Year (SPY), please review and complete the forms linked below and return to the Chapter’s Awards & Honors chairperson, David Abrams, awards@northwest.assp.org.

Past Winners of Safety Professional of the Year

For more information about the ASSP Northwest Chapter, please contact

ASSP is a global association for occupational safety and health professionals. For more than 100 years, we have provided education, standards development, advocacy and a professional community to support the advancement of our members and the profession as a whole. Our members are dedicated to creating safe work environments by preventing workplace fatalities, injuries and illnesses. Sound safety practices are both socially responsible and good business, leading to increased productivity, a better reputation and higher employee satisfaction.